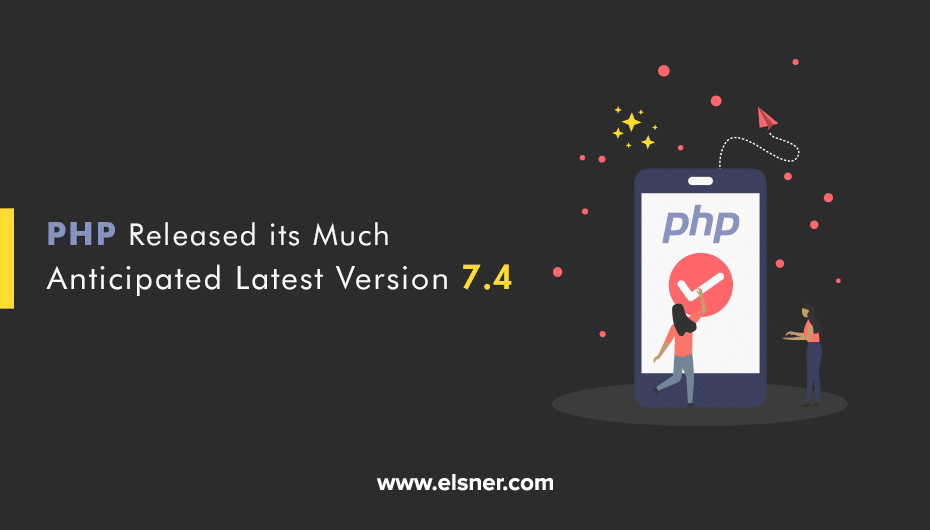 There was a lot of hype about PHP 7.4 even before it got released. And now that it has finally released, we are excited to bring to you a closer and the first look at the latest PHP version that comes with enhanced features.

People from the software industry are well-aware of PHP which is known as a hypertext processor. It is a predominantly used scripting language that is employed to develop WordPress themes and plugins. Thanks to the latest version of PHP, now you can easily enhance the performance of your website. Before this update, PHP released 7.3 version which has noteworthy enhancements in terms of security and performance.

The great news is that there was a 15% reduction in the request processing time once WordPress customers shifted from PHP 7.2 to PHP 7.3. This goes to show that PHP 7.3 is at least 10% faster than PHP 7.2.

Here are some of the new improved features that will make the lives of PHP developers easier when it comes to using PHP 7.4 for PHP development.

Without much ado, let’s get started.

The reason for the upgradation from PHP 7.2 to 7.3 was a need for improvement in performance and syntax. While PHP 7.4 consists of a lot of enhancement in terms of usability, readability, and maintainability of code. This will make PHP quicker, reliable, and less redundant.

Here are some of the RFCs that are going to be released in the PHP version 7.4 that will enhance the working performance of PHP:

PHP developers have always been craving for arrow functions that are similar to JavaScript. The reason for that is they are user-friendly. However, when it comes to PHP array functions, they are better known as short closures which makes them quite different.

There is an fn keyword (now a reserved keyword) introduced in PHP 7.4. Short Closures consist of only a singular expression with no return keyword. Although, they are not as powerful as JavaScript, however, you can always expect a swift solution for certain scenarios.

Here is one of the examples of a code snippet that displays two distinct ways to develop an array of user emails from an accumulation of user objects:

The first type hinting was introduced by PHP in version 5.0. Since then there has been a regular improvement in the feature. In PHP 7.0, there has been an introduction to return type declarations. PHP 7.4 has raised the bar by enabling PHP developers to declare types for class properties. This way, Type Classes will work only in classes and they will require an access modifier.

For example, it is possible to assign $id property only to an integer and the $title property as a string. If you try to assign an incorrect data type, it will provide a fatal error, in case, strict types are declared, otherwise, PHP will forcibly assign the value to the appropriate type.

Unpacking Inside of Arrays

Argument unpacking came into existence in PHP 5.6. In a way, it is still an unknown commodity for several developers who are working in the WordPress space. It has proven to be a handy feature in several projects.

With the introduction of PHP 7.4, PHP developers can unpack an array with an array. This is must quicker than array_merge(). The reason for that being, the presence of the spread operator (….) which is a language construct instead of a function.

Here’s an example of injecting an array of two colors within a larger array of colors.

It assists in getting rid of code redundancy for specific operators. It is an easy way to integrate an isset () check with a ternary operator.

Let’s look at an example that will showcase how to scrutinize the $product id variable. In case, it’s set, there is no need to do anything. Otherwise, we suggest you assign it the value on the right. There is tremendous growth in the way codes have evolved between the PHP versions. Now, with PHP 7.4 it is much simpler to write.

With the help of weak references, it is possible for the PHP programmers to retain a reference to an object. This way, it is impossible to prevent the object from being destroyed. Through its help, developers can easily create cache like structures. PHP 7.4 now includes direct support for weak references.

Deprecations are notices that warn developers that certain features will stop to work. Some of the features that have been deprecated are:

Nested Ternary Operators should be avoided at any cost as a developer. The reason being, they are though to follow and result in human error. However, if there is no way to avoid them, it is important to at least employ parenthesis. PHP 7.4 has deprecated this feature without the use of parenthesis.

The code snippet remains the same.

It is important for PHP developers to avoid employing array_key_exists on objects. The reason being, these objects are not arrays. Instead, we recommend you to employ a more appropriate property_exists() function or isset ().

Employing curly braces for array and string offset access is more of a rare occurrence that can be witnessed only a few times. In such cases, make sure you employ square brackets [ ] instead of curly brackets { }.

PHP has been providing different ways to indicate the start of the PHP code except for the standard <?php….?> open tags. In PHP 7.0, most of these opening tags have been discarded. However, there are still certain short open tags that are part of the larger picture.

Let’s now look at a code snippet that will work under PHP short_open_tags:

The biggest advantage of moving to PHP 7.4 is that you will get a guaranteed performance boost. It introduces preloading to the PHP core. This is possible with the help of an extension of Opcache, a software that stores precompiled script bytecode in shared memory. This way, it assists in getting rid of the requirement for loading scripts on each and every request.

Opcache employs opcodes which is nothing but simplified versions of codes. Preloading works by accumulating source files to opcodes, bringing like things together, and then keeping the compiled code in memory.

This code is much effortless and swift for PHP to pull than the option: file loaded and linked on every request. The end result is great performance gains which makes a valid point to move to PHP 7.4.

PHP 7.4 promises to boost development performance. And there is a piece of news going around about PHP 8.0. It is expected to have a much bigger update than the previous updates. To take advantage of this latest update, we suggest you to affiliate with a reputed PHP web development company today!