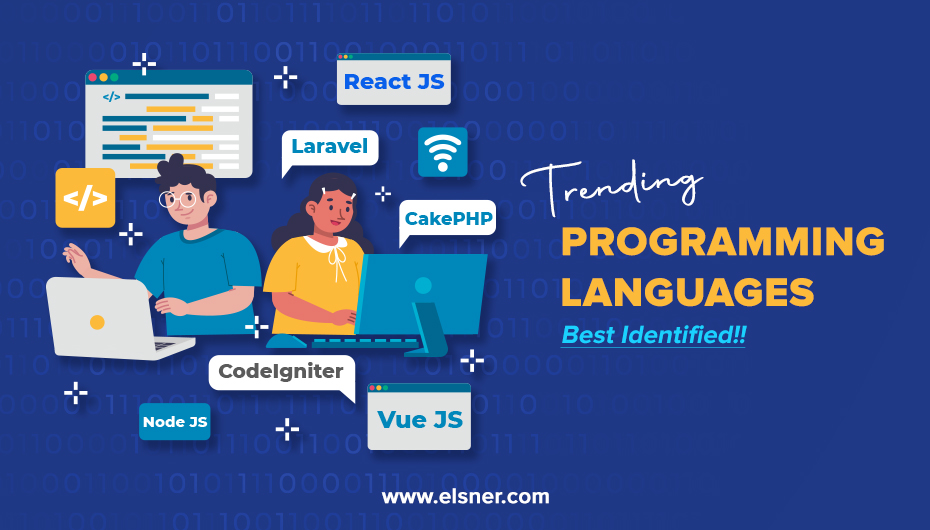 Let’s get started with learning various Programming Languages that are trending in the current times. Each programming language has its importance. It provides programmers the flexibility of making a language choice, best suitable to them and the requirement. Let us see a people’s approach to various trending Programming Languages.

Following are a few programming languages which are trending these days. Let us learn about them one by one:

Also known as a general multipurpose scripting language. It has a steep curve for learning purposes. PHP is a developer-friendly programming language if one wants to get started as a beginner. Topping on the cake is its growing popularity. Looking at the huge number of PHP development in websites as a programming language sounds crazy in today’s times. There are a variety of Frameworks to choose from in PHP. The latest stable version for PHP is 7.4

To name a few, one can count upon the following:

Is considered to be a mature programming language when compared to PHP. Being quite popular in the field of web development. Python is in demand and a popular choice across various universities nowadays. This might be due to Python being a friendly language when programming with Machine Learning (ML) or Mathematical Algorithms (MA). Besides these Python is widely used for AI (Artificial Intelligence), Operating Systems, Video Games, and Mobile Application – Android development and iOS App development. The latest trending version for Python is 3.9.0

Python boosts the development process because of the following features:

To impress your readers and make reads expressive, one can start writing about these vulnerable programming kids- “Rust / Elixir”. There are several new bees in programming languages that emerge every single day. It is no more an alien phenomenon and is very common for new technologies to enter the market and surprise the existing community. These are among those surprise elements. The simplicity and effectiveness of this wonderful programming language often are appreciated and sound appealing to its potential user community.

Rust and Elixir are categorized under can be categorized as “Languages” tools. Elixir and Rust are both open-source tools.

Being a “Godhead trinity” for the front-end development, just can’t be missed as the programmers need to be aware of these technologies up to an extent. Looking at the huge popularity of these programming languages, one can find a whole community that is dedicated to the improvement of the front-end space. Not just this, a plethora of potential newcomers is continuously joining in day by day. Henceforth, enjoy both the new topics along with potential new readers joining on daily basis. Making this a Win-Win Situation for all!!

From the JavaScript community one can count upon the following frameworks:=

React JS– React is an open-source and free front-end (JS) JavaScript library used to build UI components or User Interfaces. React is maintained by a community of individual developers and companies on Facebook. We can use React as a base for developing a single page or a mobile application.

Vue JS- Vue.js being a model–view–view model structure. It is an open-source front end in JavaScript framework. It focuses on building single-page applications and user interfaces. It is maintained by the creator himself and his team of active core members.

Node JS– Node.js is cross-platform. It is known to be an open-source, back-end JavaScript (JS) runtime environment running on the V8 engine. It executes (JS) JavaScript code outside of a web browser.

Angular– Angular is a free and open-source Typescript-based web application. It is a framework that is headed by the Google Angular Team along with a community consisting of individuals and corporations. There is a single team that built both Angular JS and Angular.

Read More about: Angular.js vs React.js vs Vue.js

Planning to stay with trends, there is a huge scope for PHP in the future as the programming language. 75% of websites currently are using PHP and we are hoping to see an increase in this scenario. Feel free to get in touch with us regarding web development for your business or services.

Hope you enjoyed the read!