Do You Need to Switch on Drupal 9 or Must Resume work with Drupal 8? 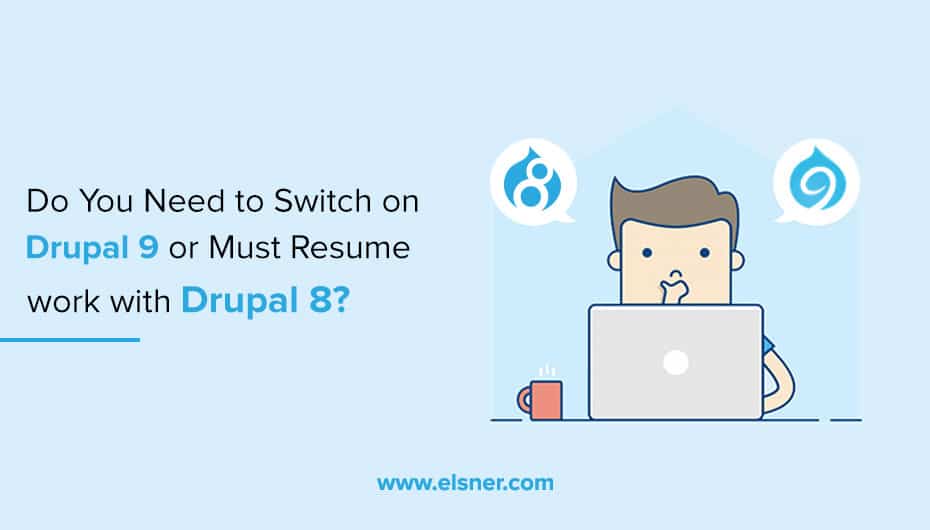 Drupal 9 is likely to be releasing this year on 3 of June so if you are developing a new site, you must take this upgrade into consideration. Drupal always supported the current and previous versions, but now the policy will probably get changed due to the advancement of Drupal 9. You will likely see more Drupal 9 framework rather than Drupal 7 or 8. It is the right time to welcome this upgrade as it has a lot in store for your current business and future business opportunities.

The main difference in this change is its backward compatibility. The Drupal 9 is completely different than its previous versions. The internal APIs were completely incompetent as modules of one version didn’t function for another version. Also, the architecture of both versions was different. For example, whether you are shifting from Drupal 6 to 7 or Drupal 7 to 8, it is has a huge difference like changing Drupal development services to WordPress. Therefore, there is a need for complete innovation still there is an upgradation fear in the mind of Drupal users who cannot randomly shift like WordPress users who can take advantage of the latest upgradation into their CMS.

Now the scenario has changed as an upgrade from Drupal 8 to 9 will be a smooth sailing ride. The changes will be integrated into the Drupal 8 parallelly like before the release of Drupal 9. Due to this, the module maintainers will have the time to add external support for the new APIs before the release of Drupal 9. Not just Drupal 9, Drupal 8 too will have all the considerable benefit for the developers. This upgrade will change the whole representation of the previous versions of Drupal.

The Drupal 9 release is on the way and Drupal 7 and 8 still have the support of 2 years. This policy will have a huge impact on how you need to plan the upgrade of Drupal 7. We have come up with an effective guide on this upgradation which will help you to make the best decision regarding whether this upgrade is beneficial for your business or not. If you find any confusion regarding the upgrade process, contact a reputed Drupal development company to assist you to take all the secure and smart decisions about the upgrade.

When is Drupal 9 Releasing?

The Drupal 7 modules expected extraordinary changes to work with Drupal 8, so multiple users never thought about adopting it. There was a huge space between the Drupal 8 and Drupal 7 modules and Drupal 7 has made noteworthy changes to stay with the primetime. Now, the good news is Drupal 8 modules are also streamlined with the changes of Drupal 9. As mentioned above, the Drupal 9 framework is likely to be released on 3 June 2020.

Its main objective is regarded as continuous updates along with backward compatibility through which Drupal 9 will be ready in a short time. Changing the codes and working patterns from D8 to D9 will be overwhelming so the teams must patch the local version of the module, and wait for the official version. When there is a difference in the code, there will be a risk for the developers to patch the module in the system.

Is it a Wise Choice to migrate to Drupal 8 or wait for Drupal 9?

As there is a great gap between the release date, Drupal 7 will reach its end till the release of Drupal 9. It would be a tough decision to make to stick to Drupal 8 or start working on Drupal 9.

If your business is seasonal, you can probably wait for Drupal 9 as you have lots of time to transfer to D9 and pay attention to the seasonal peaks.

It is the best decision to avoid upgradation if you are thinking to end the project in 2020. You can go directly to Drupal 9 after its release. You must plan to handle the differences in the site of D9 to avoid various troubles in withdrawing all the modules of D8. You can avoid all the hindrances of the process, once you are likely to start the work for an entirely new version.

Do You have any Difficulties on D7?

Drupal 7 is currently supported; various agencies and companies have expertise in working with this platform. There are a lot of improvements and functionality that make Drupal 8 best from the rest. If you have any queries or delay in work due to Drupal 7, it is the right time to shift to the Drupal 8 version.

There are many challenges in the Drupal 7 site, including the texting editorial practices for the marketing teams. Some approaches to empower the marketing teams to manage the Drupal 7 were good. However, Drupal 8 incorporates influential improvements for managing the layout and encompassing best practices to manage the page. Taking the decision to upgrade to D8 will be beneficial to you now and later.

There are no issues with D7 and also the business is not seasonal, what to do? Continue with D7!

If your business is thriving with Drupal 7 then it would be a bad decision to do this upgrade extremely soon. You can start this upgradation at the end of 2020. The development team can migrate the site to Drupal 8 while thinking about the API depreciations of D9 and identify the modules that are not ready for Drupal 9. Ensure that custom code does not decrease the functionality of the D8.

When your project is near its completion and Drupal 9 has released, you have to be thoughtful before coming to one conclusion. If the D9 is ready, go with it or you can also go with D8 and upgrade the D9 latter on. Both are an important part of success and they can also create great work for the future. The shift to the D9 would be a best-effort and you will also have the facility of modern CMS that is D8.

Read Here about 10 Professional SEO Modules that must have in Drupal Website Development.

Are You Ready for Drupal 9?

One important thing from Drupal 8 to Drupal 9 development planning is to give attention to the features of Drupal 9 in advance to take its benefit in the future. You also have to make some of the changes to get acquainted with Drupal 9. Assure that your expert team is neglecting the APIs in Drupal 8 that will be of no use in Drupal 9. By doing this, you will not have to do more work when it comes to Drupal 8 Upgrade. If you have not yet taken any reliable Drupal development services into account, consider it right now!

Drupal 9: Everything You Need to Know About Drupal Development 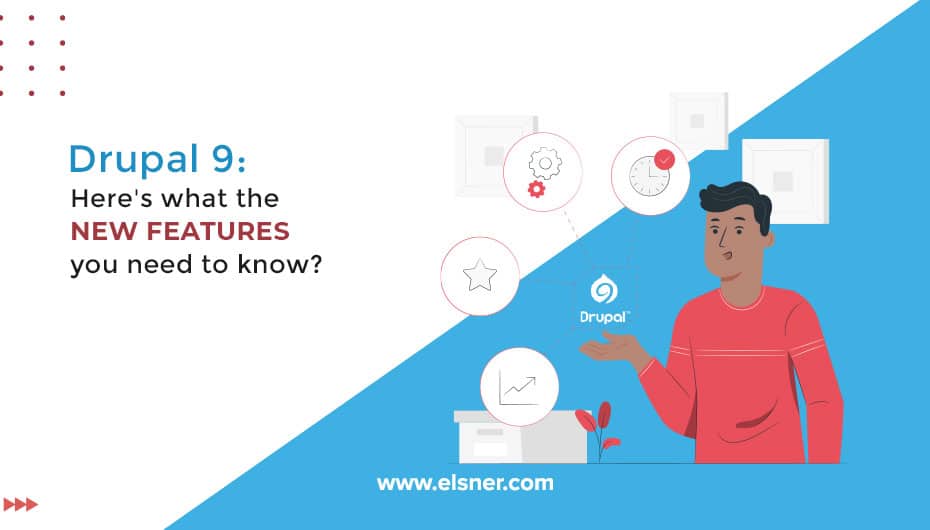 Why update to Drupal 9?

The forward compatibilities and features with minor releases will only be added to the latest versions in Drupal 9. There might be certain themes, modules, and sites that are only compatible with the latest version. The Drupal 9’s release cycle will always be updated and you need to have migrated to the Drupal version of 8.8 or 8.9 to get into Drupal 9.  Important points to upgrade to Drupal 9 are:

A renowned Drupal Development firm will always advise you to be updated with the new versions of Drupal and not to miss out on more features to ease your workload.

What is there in the new version Update?

The drupal update brings more functionality which is to handle more data with higher volumes, easy integration with other platforms, and fewer barriers for Drupal users. The coding and APIs have been changed and made modernized. Drupal Development Company with experience in the market can ensure you that Drupal 9 is a reliable update needed by each platform. Let’s see what is new in this updated version:

The latest version can use configurations, modules, and data created on Drupal 8 which was not possible earlier in Drupal 7 and Drupal 8. It focuses on breaking the code, not the data which makes it faster and updated technology.

It provided support to the responsive images which consume less data and displays the best-sized image. The innovation paves the way for faster and better performance for your platform. Supports faster page loading and multilingual supports in Drupal 9.

The code which has been marked as the deprecated code will ensure that it will not be supported and used in the ecosystem. This support provides a cleaner slate for Drupal 9 and eliminates the deprecated code. This makes the code quicker and improves performance.

The older version will be replaced by Symfony 4 or 5. The Drupal web development company will help you in working on these updates. The Drupal community may upgrade Twig and enhance the performance with better developer experience.

The essential things in the Drupal Headless CMS are:

This makes it more usable, flexible, scalable, and accessible than the earlier versions.

Basic Requirement to Update to Drupal 9

Some steps that you need to ensure before migrating to Drupal 9 are:

After following these simple steps your platform is ready for Drupal 9.

What is the Update Proclaraveless of Drupal 9?

The server needs to be updated for evolving into the Drupal 9 platform. There are certain technologies which need to be in the versions for updates:

Ensure that the server sides have these versions as they are a critical part of updates.

Update to a certain platform

By installing the Upgrade Status Module into your Drupal platform, you can analyze the Drupal setup and work on the requirements before the Upgrade to Drupal 9.

Make sure that you don’t have any deprecated code or Drupal API in your platform. Make the data compatible with Drupal 8.8 or 8.9 to be ready for Drupal 9. The custom modules or themes should be compatible with the updates.

Ensure that you don’t have any errors in the modules and themes before the upgrade of Drupal 9. Monitor issues during or after the Drupal 9 update and resolve them urgently.

Make sure that you have clean code and no out-dated elements in your platform before updating to Drupal 9. Still, thinking not to upgrade to Drupal 9 and resume with Drupal 8? We can provide an easy solution and even with the migration procedure on your finger-tips. A trustworthy and experienced Drupal web development company that has the power to ensure the best result for the platform are just here for their customers.

WordPress vs Drupal – Which One is Better in 2021?

10 Professional SEO Modules that must have in Drupal Website Development