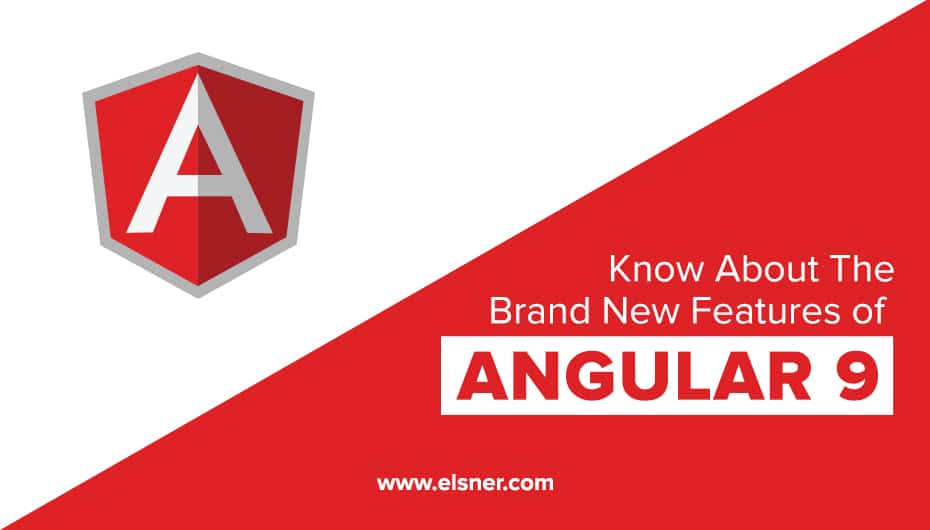 In this article, we will learn about what is new in Angular 9. The new version was launched recently on February 7th, 2020

Even though the buzzing change from 8 to 9 seems like a huge step, v9 is an extraordinary release which also includes fixing the bug.

On top of that, there are various interesting Angular 9 features that we are going to discuss in this article.

Angular is currently the most essential open-source framework for developing mobile and web applications.

It is developed by Google. Angular has been in the market for many years with a comprehensive development framework that includes components as well as tools that are required to create web applications.

Angular has a clean roadmap with a new major version coming up every six months.

Also, the Angular team works very well so that API does not change or not so often as it did from Angular 1 to 2.

This is a wonderful thing as it keeps everything up-to-date with the latest features and best practices supported by JavaScript and TypeScript.

Here, in this article we will focus on one of the problems that corrupted previous versions of Angular, like large files have adversely affected the download times, application performance, and consequence.

Another essential feature which we will focus on is the Ivy compiler. You will get a comprehensive idea of Ivy and its importance in the future of Angular. End result: It solves various issues with application performance and large bundles.

Moreover, there will be a discussion of new features, including internationalization support and selector-less bindings.

Know about JavaScript Performance and Bundles

One of the major problems of past Angular versions is the large file size of the app which is equivalent to one created in JavaScript bundles.

If you make a comparison of Angular with other libraries such as Vue or React, the Angular app is relatively good.

During the runtime, you won’t feel the difference. While the performance of Angular is good, the load time will take much time because the simple app is also large.

The size of JavaScript bundles also gives know-how of other problems. There are a lot of things to learn with Angular as it is a complete framework with built-in developing equipment, while other
JavaScript libraries are focused more on components.

What can the Angular team do to mitigate the issues arising from enormous bundle files in the past version??

One of the most essential features that were included with Angular 8 was the preview of opt-in Ivy.

Ivy is currently the brand new render pipeline and new internal build. The renderer is generally an engine that takes the instructions you put in the components of Angular with templates.

It also performs the function of translating the components into instructions which changes the DOM (Document Object Model).

The change does have a notable impact on the code that is being generated.

The Preview of Angular 8 helps the user to function easily with Ivy. When employed with the Angular 9 tutorial, Ivy is currently one of the standard renderers.

If a renderer is easy to implement and efficient, it means you can create less code as there is no need for more instructions.

Also, Ivy will change the whole game as it would bring Angular applications to a completely new level in terms of size and performance.

Ivy never transforms the way Angular is being used, but it changes the whole technique of the app generation.

The Angular team pays attention to the initiatives such as differential load tome of modern JavaScript which is inculcated with Angular.

This means that various polyfill bundles are deployed and developed together.

Smartphones and various devices account for the majority of traffic worldwide. Also, many people access web pages from locations that have slow internet connections.

Most developers can refix existing apps to decrease the size of downloadable tools and increase the user experience, but such changes could be really expensive, difficult, and risky.

By reducing the size of JavaScript bundles, Ivy becomes a welcome improvement for developers who want to speed up the developing procedure.

Instead of working with multiple formats, Angular 7 will completely make the process seamless by converting all Angular TypeScript Compiler diagnostics with similar kind of TypeScript Diagnostics format.

Latest Version 9 will also keep apps from avoiding potential issues by using the schema registry in order to verify the DOM bindings.

On top of that, consistent template diagnostics will be advantageous in supporting the generation of descriptive error messages.

Angular is dependent on various software libraries that develop separately.

Angular users cannot miss out on potential bugs and the latest features are incorporated in their libraries.

In response, Angular 9 will update the API Extractor to the brand-new version.

Bazel is a tool that is involved in the build time by the Angular toolchain.

It also gives the benefit of the TypeScript compiler engine to produce a contract report, detect the project’s exported API surface and missing visibility and inconsistency. It produces API documentation.

It is not at all the exciting update, due to functions like API extractor and regular improvements to the Language Service that make a framework efficient and productive.

What’s there in the Future of Angular?

With the inception of Angular 9, the community can get the advantage from small applications to high-performing applications and considerable developer experience.

Developers also have a more precise project structure as well as cleat syntax.

The Angular team has also anticipated that there is no requirement of major changes in APU.

Are there more deprecations and any alternative method of creating components?

In the future, more focus will be given on using more time on developing directives and components, and less time will be given for keeping them together.

The Angular team also helps with some recommendations in some fixed compiler issues and module packaging.

During this process, the team also migrates Terser minified for better parsing for the Ivy compiler based on the Angular team’s recommendation.

If you also wish to build a mobile app by using AngularJS Mobile App Development, it is the right time to contact Elsner.