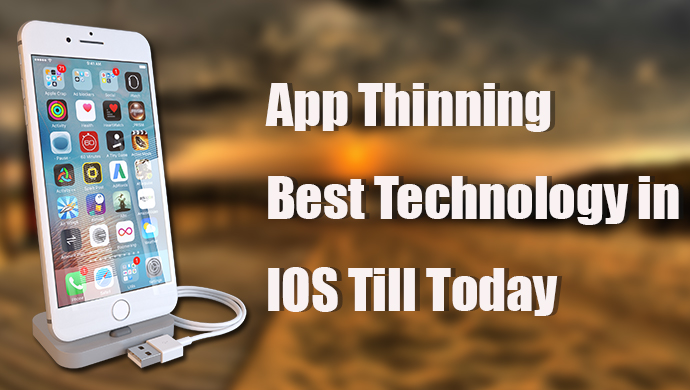 Announced at WWDC, App Thinning is an exciting new technology that will change the entire download process. With users paying big bucks for cellular data contracts, limited storage on iOS devices, and faster downloads, App Thinning is a crucial new feature to learn. Further, because app thinning has been delayed ,it’s never been a better time to learn about this exciting new technology.

Today, apps are made of much more than just code and images. Modern apps include not just executable code, but 32, 64 bit versions (optimized for various architectures such as arm64, arm7s, and arm7), 3D graphics technologies (i.e. OpenGL, Metal, etc.), audio, among other files.

In short, the calibre of apps today are incredibly complex. That’s where app thinning comes to the rescue!

App Slicing provides only relevant assets to each device (depending on screen resolution, architecture, etc.)  At last, app slicing handles the majority of the app thinning process.

When you’re ready to submit the app, you upload the .IPA or .App file to iTunes Connect, as you typically would (but must use Xcode 7 as it contains the iOS 9 SDK with support for app thinning). The App Store then slices the app, creating specific variants that are distributed to each device depending on its capabilities.

On demand resources are files that can be downloaded after the app’s first installation. For example, specific levels of a game (and these levels’ associated content) could be downloaded only when the player has unlocked them.

Further, earlier levels that the player has not engaged with after a certain set time can be removed to save storage space on the device.

The third and final aspect of App Thinning is bitcode. Bitcode is somewhat abstract, but in essence, it is Apple’s new way of optimizing apps before they’re downloaded.

Bitcode makes apps as fast and efficient as possible on whatever device they’re running.  Bitcode automatically compiles the app for the most recent compiler and optimizes it for specific architectures (i.e. arm64 for 64 bit processors such as the iPhone 6s and iPad Air 2).

Bitcode makes downloads smaller by eliminating optimizations that are made for different architectures and rather downloads only the relevant optimizations and works hand in hand with the above mentioned app thinning technologies.

Are you Aware About Latest Features of iOS 11 Arriving in Fall 2017 ?