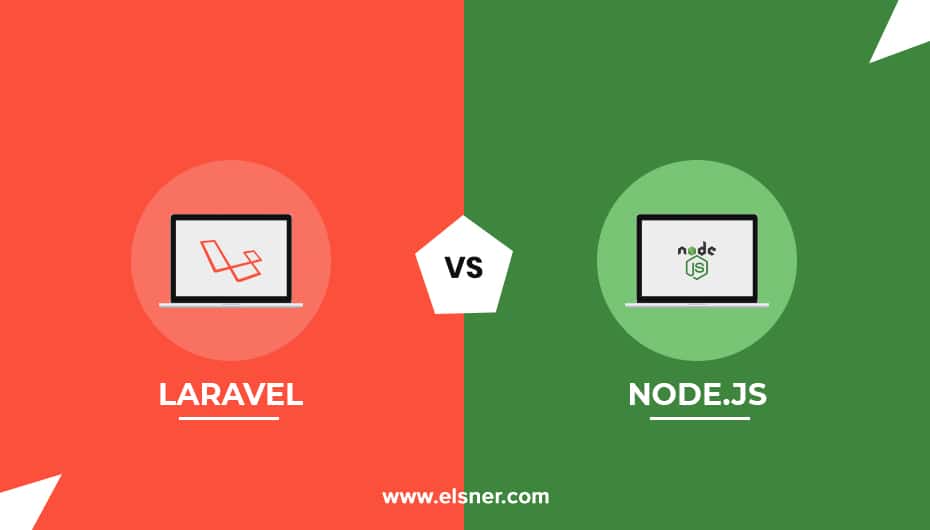 NodeJS and Laravel are famous frameworks to develop web applications. Both the frameworks are highly popular among developers across the globe due to some unparalleled advantages they offer while developing robust, secure, and highly-functional web applications.

NodeJs is a Javascript runtime based on Google Chrome’s Javascript Runtime Engine. NodeJS Development is an open-source, cross-platform JavaScript run-time environment that executes JavaScript outside of a browser. Ryan Dahl invented NodeJS in 2009. NodeJs is leading the technology market in all top websites. NodeJs is lightweight and efficient because it uses a non-blocking, event-driven IO model. NodeJs is equipped to work with Express JS and also perfect for MongoDB. In this modern IT era, NodeJS is a great tool. Templates for the framework are achieved through third-party tools as the same are not in-built in NodeJS. Using third-party tools to provide security NodeJS depends on the Bcrypt hashing algorithm.

In NodeJS, there is a feature to code both front end and back end apps and to make the application isomorphic. Because NodeJS is open-source software, there are so many packages provided by npm installer and also the largest in the world. NodeJs is leading in Russia, United States, China, Brazil, and many other countries. NodeJS helps in developing scalable systems using cluster module NodeJS users do not have to worry about deadlocking the process as there is no such system of locking.

NodeJS has gained a lot of popularity over the last many years as compared to other frameworks. NodeJS is very efficient in handling a large number of requests and works great with web-sockets. NodeJS is faster than PHP. NodeJS is perfect in designing a data-intensive real-time application that can be used across distributed devices. NodeJS has a rich library for various Javascript modules that provide developers to simplify the development of web-based applications. Companies like Uber, Netflix, Twitter, and much more use NodeJS.

Laravel is a PHP MVC framework. It is an open-source, free PHP webwork for the development of web applications. Laravel follows the model-view architectural pattern based on the symphony. Laravel was developed by Tailor Ottwell in July 2011. Since it’s just a PHP framework, Laravel does not have an IO Model. After NodeJS, Laravel follows the market share segments. But it’s leading in the business areas of Business and industry, career and education, shopping and many other categories. Laravel framework is used for the backend side of web development.

Laravel is wonderful and amalgamates well with the front end view library. Laravel is perfect for applications like MySQL and Maria DB. Laravel is a great learning curve for a good future. Laravel is a fully-featured framework with a comprehensive ecosystem with some of the best learning resources available. The templates of the Laravel framework are designed in such a way that it creates and provides a simple layout with individual sections.

Laravel can handle the requirement of getting a full-fledged framework to manage a large CMS based website. Laravel framework offers the Eloquent ORM that includes a simple PHP Active Record implementation. Laravel uses Eloquent for writing the database queries which make the task easier. If it is not used, laravel becomes slower. The Laravel framework lets developers issue web app database queries using PHP syntax instead of writing SQL queries. Laravel does not have features of sharing codes to front and back end. But instead, Laravel takes care of web application security using its framework.

There are no third-party extensions or tools that can be used to provide additional functionality to Laravel. Laravel is leading in most of the countries like Indonesia, Netherlands, Poland, Turkey, and many other countries.

Laravel comes with a strong collection of tools and provides an elegant application architecture for designing web applications. Laravel combines all of the significant characteristics found in major frameworks such as ASP.NET MVC, Ruby on Rails, CodeIgniter, etc. The Laravel framework is developed using Open Source standards. It follows the Model-View-Controller (MVC) pattern architecturally this framework is capable of saving huge development time by avoiding the developers to think and plan the entire website architecture from scratch. Laravel is also able to take care of the security of the application. All of these features can boost the development pace for creating a Website from scratch. If any developer is familiar with PHP syntax and features, Laravel can speed up the learning time for developers. Laravel enables you to craft your work more easily.

Laravel is developed to provide simplistic development for web applications. Robust and secure development are some of the key characteristics that Laravel provides. Laravel Development is known to speed up the development process in record time thus saving valuable time for developers. It provides various tools for MVC applications, database interactions, HTML templates, routing, testing, and much more. It makes the web development process far easier for web designers and developers. Companies like 9GAG, Kmong, Flyer Alarm, etc use Laravel.

By using NPM, Laravel can install both React and Vue that will be helpful for many applications. Laravel is easy to learn. Laravel is a framework that comes with many features that simply work out of the box. Another reason which makes Laravel the best PHP framework is it supports MVC Architecture like Symfony, ensuring clarity between logic and presentation. MVC helps in improving the performance, allows better documentation, and has multiple built-in functionalities.

Laravel is an excellent framework for developing secure, scalable, and maintainable applications. Digital IDEA Studio uses it for designing tech solutions of various complexity. Laravel Mix is a tool for compiling and optimizing assets in a Laravel app. It’s similar to a build tool like gulp, Grunt, and such like. it’s specific to Laravel but can also be used externally as an npm package.

To conclude, both NodeJS and PHP can serve as a great server-side framework. Both of them have some pros and cons, however, the amazing thing is that both are developed by the experts to make web and mobile development better.