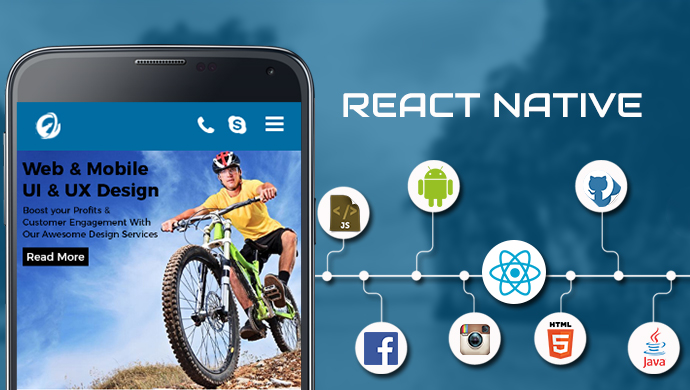 React Native is the next gen of a Javascript code library developed by Facebook and Instagram, which was released on Github in 2013.

With React Native, you don’t build a “mobile web app”, an “HTML5 app”, or a “hybrid app”. You build a real mobile app that’s indistinguishable from an app built using Objective-C or Java.

Why to choose react native over other mobile cross-platforms?

Most mobile apps built with JavaScript use Cordova, or a framework built on top of it, such as the popular Ionic or Sencha Touch. With Cordova, you have the ability to make calls to native APIs, but the bulk of your app will be HTML and JavaScript inside a WebView.

No Cordova app will match the look and feel of a real native app. The little things – like scrolling acceleration, keyboard behavior, and navigation – all add up and can create frustrating experiences for your customers when they don’t behave as expected.

While come to react native,it’s drastically changes the way of building apps that conforms the capability of native apps.

You don’t build a “mobile web app”, an “HTML5 app”, or a “hybrid app”. You build a real mobile app that’s indistinguishable from an app built using Objective-C or Java. React Native uses the same fundamental UI building blocks as regular iOS and Android apps. You just put those building blocks together using JavaScript and React.

How react native can take place of native?

React Native component definitions look and behave pretty much just like React for web components, but target native UI widgets instead of HTML. So instead of using a <div>, you would use a <View> (which on iOS gets rendered to a native UIView, and on Android, android.view).

When your components’ data changes, React Native will calculate what in your view needs to be altered, and make the needed calls to whatever native UI widgets are displayed.

Anything in a React project that doesn’t directly tie to a native platform is already sharable. Think about an app that can render on the server, in a web browser, or on Android or iOS – all driven by one shared codebase.

No need of Code -Recompilation :

Instead of recompiling, you can reload your app instantly. With hot reloading, you can even run new code while retaining your application state. Give it a try – it’s a magical experience.

Use native code whenever needed :

Anyone who has shipped an iOS app has experienced the frustration of waiting for App Store approval. With React Native, it is possible to do live updates to your app without going through the App Store – much like for a web app.