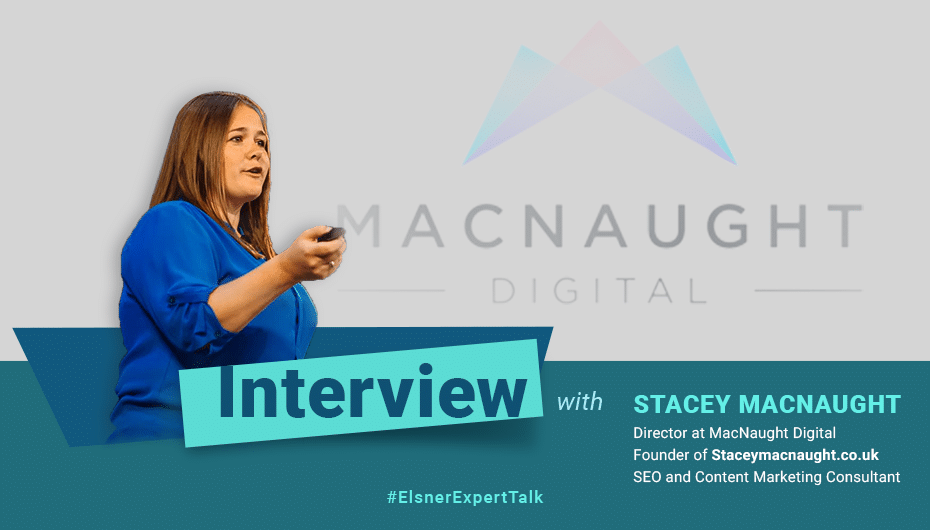 Stacey MacNaught is a renowned SEO and content marketing specialist who is passionate about SEO. Started in 2009, she has spent almost 9 years at a Manchester agency and then went freelance. She founded MacNaught Digital in April 2018 and started offering valuable, innovative and unparalleled digital marketing solutions to clients.

MacNaught Digital serves clients from different sectors from retail, healthcare, finance, to name a few. She has a team of 6 SEO and content marketing professionals who leverage their expertise to offer result-driven strategies and solutions that put their clients ahead in the competition. She has also delivered lectures at some amazing conferences such as Mozcon Seattle, BrightonSEO, SearchLove London, SASCon, Learn Inbound and SMX London.

Can you Tell us About Yourself? How’d you Get into the Online Marketing Industry?

Stacey MacNaught: I started in SEO in 2009 by accident really. I was freelance copywriting and clients were asking increasingly about SEO. I started to self teach and realised rapidly there was a whole lot more to it than I could feasibly master on my own. So I went out in search of an agency trainee role and saw a company in Manchester was hiring trainees. I interviewed with Tecmark and was offered a role. I think my plan was probably to do a year or two, figure out the whole thing and then head back to my happy copywriting work! I loved (and still do) writing.

But I really loved SEO. I was training under one of the co-founders, Kevin Jones. He remains one of the smartest people I’ve ever worked with. He held a number of really competitive rankings in the UK and was a great teacher! I learnt so much from Kevin very quickly. And on the other side of the business, the other founder, Richard Heyes, was the commercial head handling sales, client relationships, how we positioned our services and so forth. As I progressed through roles within Tecmark, I was given more exposure to that side of the business and became pretty confident with B2B proposal writing, account management and the non-SEO elements of the agency.

Throughout this time I also started speaking at conferences and had opportunities like Mozcon, BrightonSEO, SearchLove, LearnInbound and a load of others, so another element of my personal development was the public speaking side.

By 2014, I was promoted to Search Director and sat on the board at Tecmark. Around that time, I found I was pregnant with my first son too. It was only a couple of years before my second son followed and it was around this time, when I was on maternity leave with our second, that I started to question my options.

I’d learnt a lot at Tecmark and it was career transforming for me. It was exactly the start I needed in the industry. But with a family to balance as well, I started looking towards options that wouldn’t mean losing a couple of hours each day to commutes. And as I started to look at my role at Tecmark, I became a little more self aware. I did not enjoy people management. Not one bit. And, as is the case in many organisations, the further you progress, the less hands on you become.

I wanted to do something that suited my lifestyle, gave me a better balance of being home and being at work and saw me hands on. So I set out freelancing at the beginning of 2018 and a few months in, made my first permanent hire (my Mum!). This was the beginning of what is a small-by-design agency.

What are the Biggest Hurdle Encounters you Faced when Scaling MacNaught Digital?

Stacey MacNaught: So, scale isn’t something I need to worry about because I’ve no intention of doing it. When I was with Tecmark and we were looking at growth, some of the scale pain points we encountered were around people. In the services game, it’s all about people. And actually, finding talented seniors (head of or director level) who want to work for someone else in SEO can be quite tricky, I think.

When I set out on my own, I made the decision that we’d be 8 or 9 people at most. It was when Tecmark was that size I remember it being the most fun. And I wanted that again. So we’ve deliberately decided not to scale in people terms.

This means we’re very selective in terms of campaigns we take on for clients. And in terms of scaling revenue, we’re running a number of our own affiliate projects and lead gen sites which give us financial scale without necessarily needing to pile people in. So scale in people terms won’t be something I’m going to be worrying about.

What are the Top-3 Errors you Made at the Beginning of Your Online Marketing Career?

Stacey MacNaught: I think my absolute biggest error earlier on was simply not taking the time to figure out what I want from a role. I took promotion after promotion because I knew I wanted progression and progression looked like management. But management, in reality, made me unhappy. It took me a number of years to figure that out about myself and I could perhaps have got there a couple of years sooner!

The second error I made was putting in waaaay too many hours. At some points in the first few years, when I look back, I’d be on the job from 8am, home by about 5:30. I’d have dinner and then get back on it from 7 until I went to bed. I didn’t have children at that point and my now-husband was very understanding about it. But in hindsight, it seems a crazy waste of evenings and at points probably contributed to feelings of unhappiness towards my job. I should add that nobody ever forced those hours on me. I have an issue with leaving things unfinished at the end of a day

In terms of activity specific mistakes… Well, I dropped the ball BIG TIME writing a robots.txt file in my first month or two. Catastrophe averted by someone more senior than me who caught it before it went live, thankfully.

Your Thoughts on Google and Australia News Media Controversy

Stacey MacNaught: So, unlike Facebook, Google has actually sat down at the negotiating table and agreed some sort of financial reimbursement for Murdoch’s news companies, at least. But what Facebook did, just stopping news sites’ content from being shared on its site highlights actually how much of a reliance news sites have on tech giants like Facebook and Google to send traffic. Of course, news companies are finding their ad revenues in massive decline. And I agree that a free, effective media is important to any democracy. But I’m not sure I agree that it’s up to Facebook and Google to foot the bill if the value exchange is fair (i.e Google and Facebook ultimately being platforms that send traffic to these publishers).

If Google continues this trend of monopolising content and using publishers’ and businesses’ content on its results pages without sending users to the end website, then arguably a fee should be paid not only to news publishers but to anyone whose content Google uses in this way without the value exchange of ultimately sending the user to that website.

I’ll be interested to see how this all pans out as I do think this could set a precedent for other nations too.

What Advice can you Give to Those Who are just Starting their Career in Digital Marketing?

Stacey MacNaught: Get your hands dirty! If you’re struggling to get an entry level role then build a little website, rank it for some keywords (if you’re thinking about SEO). But whatever channel you’re most interested in, demonstrating that you can take a brand new web asset (website, Facebook group, TikTok profile… whatever it is) and create an audience for it is you demonstrating that you are a digital marketer in the making.

Personally, I think starting in agencies (if it’s the right agency) is a great move because you get exposure to a ton of different businesses in various sectors with loads of different challenges and business models.

But ultimately, just learn as much as you can. Wherever you start out, just learn, read, experiment, test. Run your own site to run tests on if you don’t have access to one or two within your job.

What Makes You a Successful Motivational Speaker?

Stacey MacNaught: So, I certainly wouldn’t regard myself a motivational speaker. I share tactics, case studies and experience to help people learn more about SEO, content and link building. So a speaker, sure. But probably not in the motivational camp! 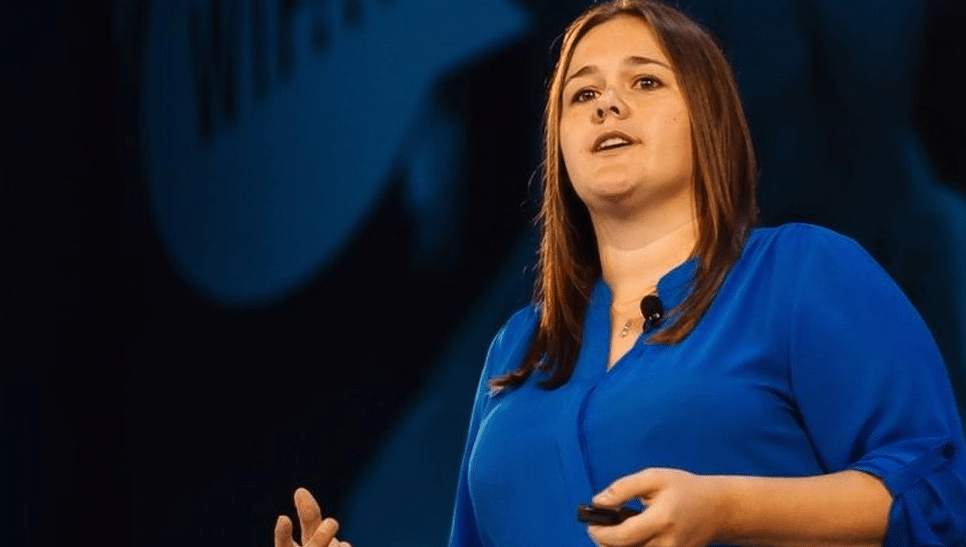 I’ve been lucky to get so many invites to speak and I’ve had some great feedback from audiences at times. For me, I’ve adopted an approach with speaking of being practical. Not every single talk at an event needs to be practical and sometimes people just need inspiration. But I’m better at delivering practical and inspirational any day of the week. So I make a point of challenging myself in every talk to give people something they can go away and try tomorrow.

Any Unforgettable Moment you want to Share at any Conference Event

Stacey MacNaught: The last in person event I went to was early March 2020 and it was the WTSFest organised by Areej Abuali (which is going virtual this year). It was a woman only and the day was organised in such a way that the last 3 speakers of the day were all non-SEO related and more personal experiences/empowerment led.

There was Hannah Smith, myself and Kirsty Hulse up in that session. This was hugely intimidating to me for 2 reasons:

Despite more than twenty conference talks before this one, it was amongst the most nervous I’d been.

But that whole session was just something else. It felt like being in a room with 200 of your best friends. Across the three talks, there was audience cheering, audience tears and moments that felt really pivotal.

I don’t know specifically what made that conference so special. Maybe it was the right size of event, the fact this was only women? It was probably a combination of those two things and perfect programming to bring a day that was practical and marketing related throughout but ended on different note.

It was a really special event.

At the End of the Day, When You’re done with Work and Winding Down, What do you Like to do to Recharge or Rest up?

Stacey MacNaught: I love to walk. I have 3 sons and the youngest is only 9 months, so getting time alone doesn’t happen much. But I live somewhere where I can head out of my door and be up a huge hill with no other humans in about 10 minutes on foot. So I often pop the baby in the hiking carrier and just walk out somewhere.

No matter what’s going on, I can guarantee that I’ll feel better after that.

An Insightful Interview with Rand Fishkin: A Co-founder of SparkToro