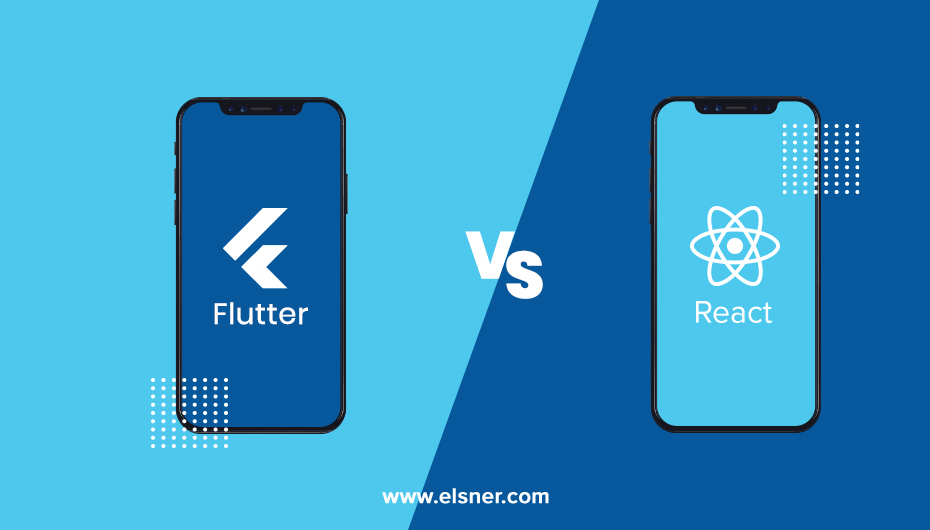 There are many cross-platform frameworks available to develop one code based mobile apps that provide the closest performance to the real native applications. The most powerful framework is Google’s Flutter and Facebook’s React Native. Let’s look at the strengths and weaknesses of Flutter vs ReactNative and do an objective comparison.

One of the most important factors is the convenience of using each framework and the developer experience. To estimate the productivity of each framework, we’ve chosen five criteria.

Hot reload support. This function relaunches the app automatically when there are code changes. Additionally, it retains the previous stage of the application. Both React Native and Flutter support this feature. According to developers, this feature makes the development process more accessible and saves time.

Code structure. There are large differences in the code structure. First of all, Flutter’s templates and data aren’t separated throughout the code. It utilizes the Dart programming language. Moreover, the UI layout created in Flutter doesn’t need any other templating languages or visual tools. These processes lead to saving time. React Native leaves the structure decision up to the developer, which makes it a tradeoff to consider.

Installation and configuration. Flutter is very simple to install and begin using immediately. Additionally, the Flutter doctor assists in solving system issues. React Native has tools to help create a new app and provide libraries that are essential to development. In addition, they will provide some structure to the code. The most popular tools to create new React Native apps are Expo and Create React Native App.

Supported IDEs. Flutter supports fewer IDEs, e.g. IntelliJ IDEA, Android Studio, and VS Code. On the other hand, React Native integrates with many IDEs, so it’s difficult to choose which one to use.

Hardware-specific API. React Native offers geolocation and Wi-Fi programming interfaces. Also, there are options for Bluetooth, camera, biometrics, and NFC. There aren’t many solutions for drawing with the customizable graphics, and it can only be achieved only with the help of native code. For Flutter, many hardware-specific APIs are being built now. So, it’s quite challenging to make a claim currently. Flutter’s success depends on the quality of hardware-specific APIs.

React Native uses JavaScript along with JSX syntax for building views. JavaScript can be used for mobile development as well as web programming. Additionally, developers can choose Node.js for back-end development. It allows us to use one language for all parts of the stack.

Flutter utilizes the Dart programming language. This language isn’t as popular as JS, but Google uses and promotes it. Dart offers a gradual learning curve for native and React Native developers.

Flutter: Flutter architecture uses the Dart framework which has most of the inbuilt components like Material Design and Cupertino, packed inside which provide all the required technologies needed to develop mobile apps. So, it’s bigger in size and often does not require the bridge to communicate with the native components. The Dart framework uses the Skia C++ engine which has all the protocols, compositions and channels.

One of the most significant advantages of Flutter is the opportunity it offers to utilize its UI components instead of the OS’s native ones. As a result, it’s much easier to provide customized UI components and improve flexibility.

There are such Flutter UI elements:

Using Flutter’s widgets, it’s possible to achieve a high level of compatibility with the OS’s components along with native screens. However, there is still a necessity of the Cupertino library for iOS applications development, e.g. iOS-style form components.

On the other hand, the developers can get a more personalized user experience because the React Native UI libraries are quite extensive.

Flutter: Flutter takes an entirely different approach to render apps on the screen. To start with, Flutter does not make use of native components from either platform. Instead, it creates its widgets and makes use of the GPU to render it on the screen. It compiles all Dart code to native ARM code which can then be run directly by the CPU. This makes apps built with Flutter quite fast. Flutter’s application is compiled using arm C/C++ library so that it’s closer to machine language and gives better native performance.

React Native: React Native, on the other hand, makes use of a Javascript bridge to interpret the UI components to be rendered, which then invokes Objective-C APIs or Java APIs to render the iOS or Android component on the screen. This extra layer of abstraction might make React Native apps slower.

Flutter: Flutter providing very good documentation, it makes the mobile app developer’s life easy by allowing them to use them while documenting their applications. Hence as far as documentation and Toolkit is considered Flutter is the best option when compared to the counterpart.

React Native: The documentation of the React Native framework is not organized because most of the components are designed by third parties and they do not provide proper documentation.

Flutter: Flutter has a strong command-line interface. We can create a binary of the app by using the command line tools and following the instructions in Flutter documentation for building and releasing Android and iOS apps. On top of this, Flutter has officially documented the deployment process with fastlane here.

Flutter: Flutter has a section on Continuous Integration and Testing which includes links to external sources. However, Flutter’s rich command-line interface allows us to set up CI/CD easily.

React Native: React Native doesn’t have any official documentation to set up CI/CD. However, there are some articles that describe CI/CD for React Native apps.

Flutter and React Native frameworks have their advantages and disadvantages in terms of stability, performance, documentation.

Some of the industry experts have predicted that Flutter is the future of mobile app development and as we compare above aspects, it’s clear that Flutter has entered the cross-platform development race very strongly.