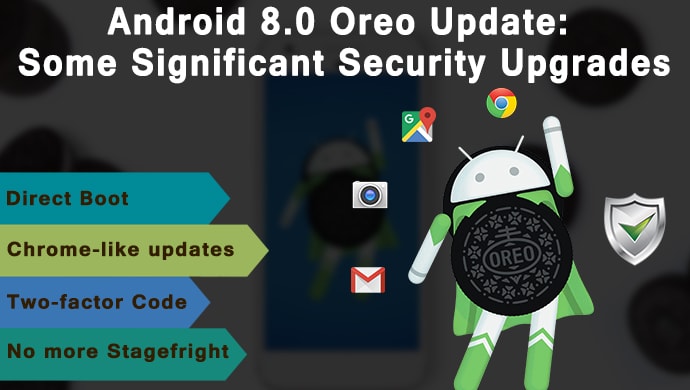 Here it is! The World’s Favourite Cookie is Your New Android Upgrade.

Android 8.0 Oreo update is now the most trending topic amongst the Android users.

Although Android 8.0 Oreo update contains some things that can be seen immediately and directly, it also has certain significant stuff going on in terms of security. In the below article, you will go through certain security upgrades that would be found in the Android 8.0 Oreo.

While using any app for the first time after downloading, might have seen certain permissions that contained a lot of information which will let you hit ‘OK’ without paying perfect attention. But with Oreo, there will be a couple of those permissions in two-three steps which may include permission for system alert window, long-standing android permission and a lot more.

Android O – A Complete Guide For The Android Users

Since 2013, Android contains a Verified Boot System, and with Oreo, the system has expanded. Android’s Verified Boot System will not only perform the standard start-up checks but also will prevent your device from starting if it has been rolled back to the older or less secure OS version. This protection will prevent anyone from taking control of your device and misuse it.

Oreo has come up with a support for new tamper-resistant hardware. The same chip will store the sensitive information in a modern credit card. The information like you PIN, pattern or password on the android phone can be easily stored in the hardware. With this, it becomes difficult for someone to perform a physical attack on your device and get around your lock-screen.

Sandboxing isn’t something that is a very new feature of Oreo, Android has utilized it since long to keep various parts of their operating system in their own isolated areas. With Oreo, the effort is just expanded to another level. Oreo contains project Treble that isolates the part that are independent of the device from those which are dependent on the device.

It contains seccomp filter which prevents the naughty apps from affecting your device.

And at the end, Oreo contains WebView function which will prevent web-based content containing bug from affecting your Operating System.

But, When it comes to security and development, the evolution never ends.!