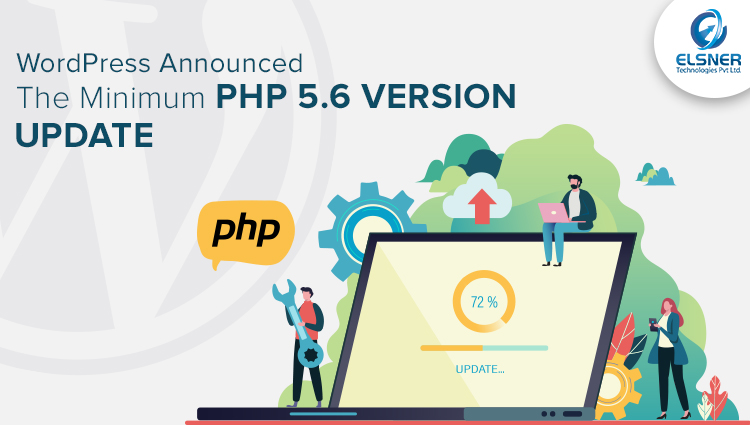 Here comes an end to the years of debate for the WordPress minimum version requirement. Since only 2% of the WordPress sites run on PHP 5.2 and 20% sites run on versions PHP 5.5 or earlier, WordPress officially announced to end the support for the PHP versions 5.2 to 5.5.

The minimum required PHP version for WordPress is now PHP 5.6.2. We are indeed getting ready for another huge improvement for this popular CMS.

PHP runs quietly in the background and the magic you see happens on the front-end. It is the only language that WordPress relies on,  which makes your site look and function in the way you expected.

Millions of people on WordPress don’t even know which version of PHP they are using currently. But recently, notifications to the users has been observed for them to upgrade to the new PHP version.

Since many site owners don’t have the technical knowledge on the PHP versions, this news is causing technical irresponsibility according to Andrey Savchenko.

The shift is not happening at a breakneck speed but had been in the discussion for long. It is considered to be the first step towards PHP version 7.

Site owners who want to remain in PHP version 5.5 or below will receive the security patches but would not be able to have the advantage of the latest WordPress version until they upgrade.

The notification also helps the site owners by providing them the information to update.

One may ask,  how keeping PHP up-to-date will help the site owners?

Since the latest PHP version is more efficient, it will boost the performance three to four times faster than the previous versions.

Popular platforms are on the top targets of the hackers. In order to have the latest security features for the WordPress sites, it is of utmost importance to update the PHP version. Older versions will have less support from the community when it comes to security threats.

Customers tend to leave the site which takes more time to load. If your site is more effective and is faster loading, it will retain the visitors.

These are some of the compelling reasons to update PHP today. Also, the WordPress 5.2 Beta version supports the PHP version 5.6 now.

With unsupported versions, you will not be able to upgrade to WordPress 5.2 to your site. Manually updating the WordPress version will also not be possible. WordPress also now encourages the site owners to directly update the PHP version to the recommended version PHP 7.3.

The upgrade will only be in the benefit of the site owners, improve the speed and provide better security features.

Before you upgrade to the new PHP version, do not overlook the following tasks:

WordPress plugins and Themes on your current site are the main concerns while updating the PHP version. The newer version may not support the older version plugins and themes. In such cases you need to follow couple of steps;

1. Take a back up of your current site:

In case if anything goes wrong, a back up will allow you to go back to the original version. There are many back up plugin available which are free, you can use any one of them.

2. Update the themes and plugins:

To ensure that the site works as per the expectation, you need to update the themes and plugins regularly.

You can take help from the wordpress developer and ask them to resolve the issue. If the problem can not be resolved, you can check for similar functionality WordPress plugin and use them instead.