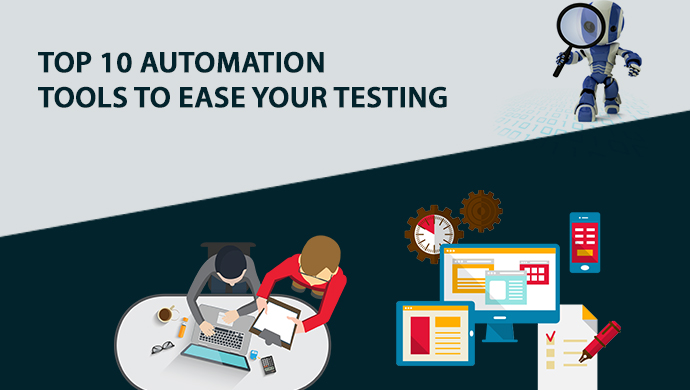 Let’s get started with these outstanding automation tools that works tremendously for testing any data.

The emulation scripts are generally created with the help of ANSI C programming language. Not only Java and .Net programs can be run by LoadRunner, but is also supported by testing tools such as Apache JMeter, NUnit, and Selenium simply by declaring an interface library.

The tool consists of 3 major components:

It also used for mobile Testing / performance testing but need to coordinate it with other tools like Selendroid, Appium.

It is not a single tool but a set of components:

The tool contains GUI object recognition capability of can detect and update UI objects which help reduce the effort to maintain test scripts when the AUTO is changed. It also integrates with Jenkins in a CI process.

Appium is built on an idea that testing native apps shouldn’t require including an SDK or recompiling your app. This tool aims to automate any mobile app from any language and any test framework, with full access to backend APIs and DBs from test code. Write tests with your favorite dev tools using supported programming languages.

Apache JMeter is an Apache project that can be used as a load testing tool for analyzing and measuring the performance of a variety of services, with a focus on web applications. This tool can be used as a unit-test tool for JDBC database connections, FTP, LDAP, Web Services, JMS, HTTP, generic TCP connections and OS native processes.

JMeter architecture is based on plugins. Most of its “out of the box” features are implemented with plugins. Off-site developers can easily extend JMeter with custom plugins. Each plugin serves different purpose and expedites the process of creating and executing JMeter Test Plan. Users can install the plugins via Plugin Manager. Currently there are 64 plugins available.

Katalon Studio is one of the most powerful test automation solutions for web application, mobile, and web services. The tool supports different levels of testing skill set. Katalon Studio can be integrated into CI/CD processes and works well with popular tools in the QA process including qTest, JIRA, Jenkins, and Git.

If you are looking for an automation tool with rich UI view of test execution reports, Katalon Studio is a right solution for you. They offer an visual and in-depth test report which can help your team improve performance and productivity.

This tool is an American cloud-hosted, web and mobile application automated testing platform company based in San Francisco, California. Founded by Jason Huggins, the creator of Selenium, Sauce Labs lets users run Selenium, Appium, and JavaScript unit tests across 400+ browser and OS platforms at scale without setting up or maintaining dedicated testing infrastructure. With more than 150,000 users, Sauce Labs is trusted and loved by customers across every industry, including Salesforce.com, Dropbox, Twitter, PayPal, Yahoo!, Etsy, Google and more.

Cucumber is structured based on BDD approach. It runs automated acceptance tests written in a behavior-driven development (BDD) style. It allows expected software behaviors to be specified in a logical language that customers can understand.Cucumber is written in the Ruby programming language and now supports a variety of different programming languages through various implementations. For every cucumber project there is a single directory at the root of the project named “features”.

In this directory you will find additional directories, which is step_definition and support directories. In this we need to describe only scenario in 3 section. “Given”, ”When”, ”Then”.

Given – It specifies the context of the text to be executed. By using datatables “Given”, step can also be parameterized.

When – “When” specifies the test action that has to performed.