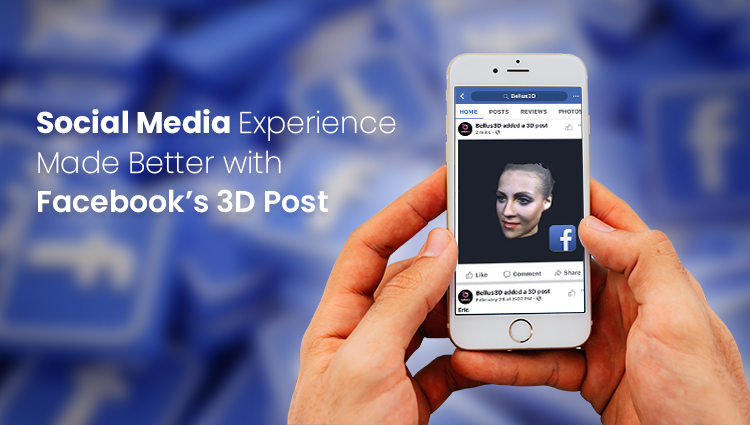 Today, the world run’s on the pillars of marketing and a good content with appropriate visual is what will catch the viewer’s attention. And to make the digital experience more interesting, the companies and social media are entering into the concept of Virtual Reality.

Everyone would like to have some innovation after a period of time in both content visuals and social media experience so updates and new developments are necessary brought in the market.

Following the steps of innovation, Facebook has introduced its new features i.e Facebook 3D Post. The concept was developed in the month of May this year, though a very little amount of information was shared by the technical experts.

In-depth details were provided recently by TechCrunch, about the working and visual tests of the feature.

The 3D post feature will enable you to experience a live photo in your news feed. It will appear like a window frame and the images will respond accordingly when you tilt your phone.

The feature is not restrained to any specific image type and can be made applicable to landscapes and panoramas. The idea of real visual is as fascinating as it sounds.

But how does this new feature is developed and can be put into action? The answer is simple, it is a task done by using the dual camera of most modern smartphones.

This reduces a lot of the efforts of the creator. To understand the mechanism better, TechCrunch says that phone’s dual camera will click a pair of images and later will calculate its “depth map”, an image coding that will ultimately convert the image into a 3D image.

The creation of VR content is a progressive step even for a Digital Marketing company as it increases the viewer’s interest because marketing is all about how you present and VR is one of the best ways to attract viewers attention.

The 3D posts are just a baby step towards the creation of VR in facebook. Facebook is constantly striving to provide new features to its customers by keeping a track of what the consumers will like and need. For the same purpose, it has been trying to push facebook stories which included AR tools and effects, ultimately driving the user to VR interaction.

The most a part about the feature is the ease of creation, as it will not require any kind of plugins to create a 3D image.

The feature is to roll out soon this summer as stated by TechCrunch which will take the user’s social media experience on-to another level. Although the step seems small, is expected to last a good impression the viewer’s mind.

Lastly, a marketing company like Elsner that works globally also strives to provide the best digital experience with better visuals and AR tools, increasing the value of the content and generating leads for the company.

What is Digital Marketing? A Step by Step Guide for Online Marketing

Get Familiar With An Online Auction System

How to Increase Google Adwords CTR in 2018

Common Disasters in Google Adwords : Learn How to avoid them