Do You Wish to Develop a Mobile App Similar to FaceApp? If Yes, Read This…. 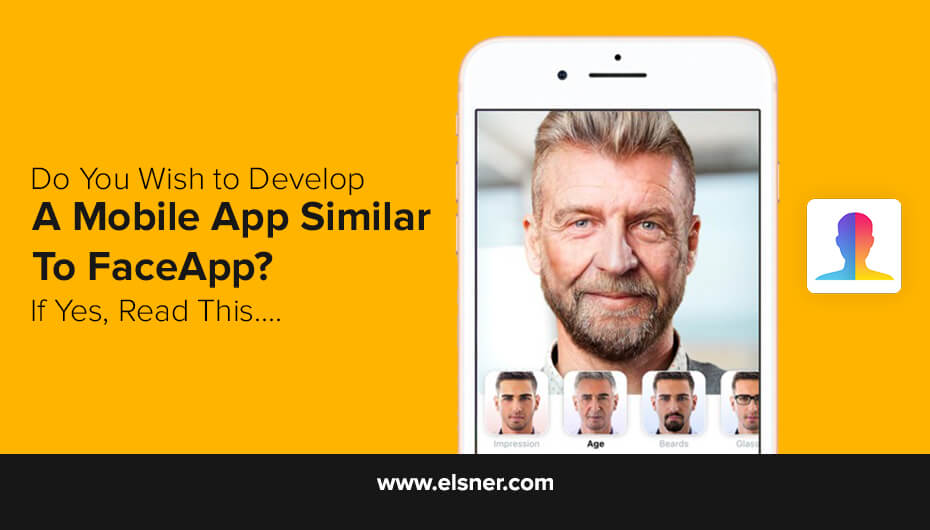 FaceApp has become the most prominent mobile app with a user base counting to 150 million and still growing. We are seeing more and more people using it nowadays.

1. Users who want to know everything about the working mechanism of FaceApp;

2. Entrepreneurs who are looking for the cost to develop a mobile app similar to FaceApp.

We are here to provide an answer to the second type of people.

Every business today wants to create a mobile app that drives the target audience and brings in more revenue. This constant urge of doing better than your competitors drive entrepreneurs to create the right noise around their brands. Certain mobile apps are not high in terms of innovation but have the potential to become chart-topping apps. One such app that is making the right noise across the globe and is regarded as the social status wonder is FaceApp.

In recent times, if you have opened your Instagram or Facebook account, chances are, you might have encountered people like your friends and celebrities who have uploaded their pictures. The only catch is, these pictures showcase how they would look when they grow old, what they used to look like as babies and if they were from the opposite gender.

Social media platforms have been bombarded with millions of altered faces coming in from across the globe with the #FaceApp hashtag. The brain behind its creation, Yaroslav Goncharov, has already created a sensation. It has hit the sweet spot in attracting the users. People have started to share pictures showcasing their aged, young, and gender swap photos. Even the Jonas brothers were not able to resist the temptation, and hence the popularity of FaceApp raised to another level.

Today, the popularity of this app is not only due to the contribution of millions of users who have fallen prey to influencer marketing and paid promotion practice. It is also the entrepreneurs who are looking to take the maximum advantage by creating something similar to FaceApp.

In the forthcoming sections of this write-up, we have provided all the information that you would ever need as an entrepreneur if you wish to develop a mobile app similar to FaceApp.

Statistically, it has been proven that FaceApp has taken over lots of face altering apps that are already present and flourishing in the stores. If you wish to create a mobile app similar to FaceApp, it is crucial to integrate these comprehensive features list.

The first primary feature that you need to have in your mobile app is the ability to capture or upload an image from the gallery. It should be noted that FaceApp has come into negative feedback, mainly because it is not asking permission of users before uploading their photos. But, if you want to clone this idea, the best possible thing is to ask the mobile app development company to have a provision to resolve this issue.

AI-powered filters are the basic keys to your FaceApp. After you have uploaded your image or captured one in real-time, these filters can help you change your appearance into an older/younger self. Alternatively, it can even make you a different gender or a make-uped you.

With the help of these filters, it is possible to alter your appearance into an older/younger self. Alternatively, you can even see yourself as a different gender or a make-uped you.

To create such technology, you will need it to be a developer under your brand name. Utilize the same technology as FaceApp. You can even use different other editing apps like Neural Networks.

Your mobile app should also be able to take the full mileage of the image on reputed social media networks that assist to like, comment, and view.

There are several free features in FaceApp, but there is a certain amount charged to avail premium features. These features include no ads experience and filter updates. Three different payment modes can be set on PRO mode – monthly, yearly, and lifetime.

It is important to integrate a section that enables feedback and report app issues directly to the development team from the app itself. This has been done in a matter of clicks for users at FaceApp so that they can easily pass on the issues.

The core feature list of FaceApp will provide you with the exact figure of the development cost creating a mobile app similar to FaceApp. It is significantly contingent on the neural network surrounding the AI algorithms. This way, they assist in ensuring that millions of app users can upload their photos on a real-time basis.

Let’s now look at the tech stack of FaceApp.

Although FaceApp engineers have not provided their tech stack yet, these are some of the likely technologies that you will need to create a similar application:

While we assume these are the possible tech stack to create a mobile app like FaceApp, the answer can probably be different. It can very well end up being dependent on the frameworks that are required for each stage of the development process.

Now, that we have looked at the tech stack of FaceApp, it is time to address the most critical question: What will the cost to develop a mobile app similar to FaceApp?

The Cost of Developing a Mobile App Like FaceApp

It is quite challenging to give you a precise answer to this question. But, we will try to address this by providing a ballpark cost range based on the feature list that we have discussed and the tech stack enumerated.

If you employ the replica of the features and tech stack, then the cost would be approximately between $ 100K to $120K. Although you might think that the development cost of a mobile app like FaceApp is on a higher side, the returns are probably more significant.

How to Make the Mobile App Like FaceApp Get Viral?

There was a lot of planning of months that went into the overnight success of FaceApp. They worked on a two-fold marketing plan. One of them was based on the “Construction of a New User Narrative.” It assisted users to explore different facets of themselves. It provided information like how they would look like when they get old or what if they were the opposite gender, etc.

Once that idea became a hit, it was only a matter of time before it got viral. This was done with the help of paid and earned influencer marketing.

FaceApp followed the concept of influencer marketing. It started with paid influencer marketing, and then it gained traction amongst social media influencers and celebrities. This snowball effect of stars took little time to reach users who carried the name across the globe.

Now, that you have got a fair idea of developing a mobile app similar to FaceApp along with the estimated price, it is about time to start developing your concept by contacting a professional mobile app development company.