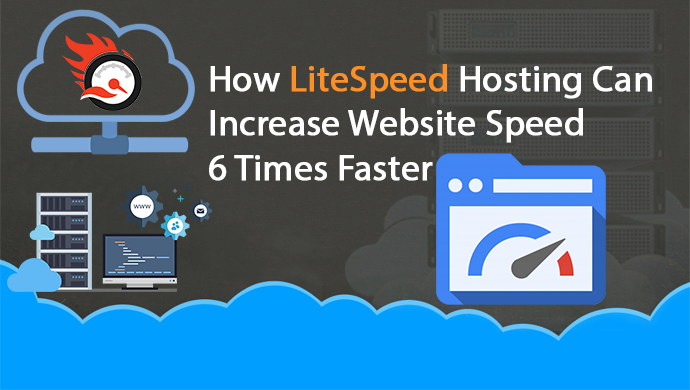 Owning a website, but fed up with the performance of your website? Here is your solution! Elsner has come up with one of the finest hosting services that will make your website work six times faster. With a lot of study and research, we have come up with certain reasons why one should use this LiteSpeed server. This server has many advantages as it is known as the fastest web server over the internet. It is no latest buzzword, it has been installed since 1-2 years.

As the name says, this server increases the speed of the website and makes it similar to that of light. Read on and find out why this server should be used to improve the performance of your website.

This server performs well with every website, be it a busy website or a website with a low number of visitors. A website which carries thousands of visitors every second uses very minimal hardware resources. The LiteSpeed server plays a vital role as a vastly working static content. It has various handlers for various languages which enhance the performance of the website. For an instance, it has custom PHP LSAPI for PHP performance improvement. This server is most works most efficiently with busy websites also offers enhanced the security of the data. This server is compatible with Apache totally, the mod_security module can be used here with Apache in order to block most of the web attacks. Upon that, LiteSpeed has its own security features to face against DoS or DDoS attacks. The server has built-in anti-DoS and anti-DDoS features named bandwidth and connections throttling.

This can be one of the most important features for any website. How you take care of a website causes the better scalability of the website. This server can help you in handling the website with multiple visitors without any load on the website. With this server, all the codes and content are optimized in such a proper manner that in the case of any problem, it manages all the attacks with no difficulty.

As it makes the least use of hardware, it is totally cost effective when it comes to the expenditure done on hardware. It is simple logic that paying some amount for the server license is far better than paying thousands of dollars for certain hardware used to handle the load of the website.

Also, the server provides 24/7 technical support which may also reduce your costs for systems. At Elsner, we have various support packages for any kind of immediate help. Also, the server is supported by cPanel officially.

Let’s have some detailed description of the Features as well as benefits of the server! 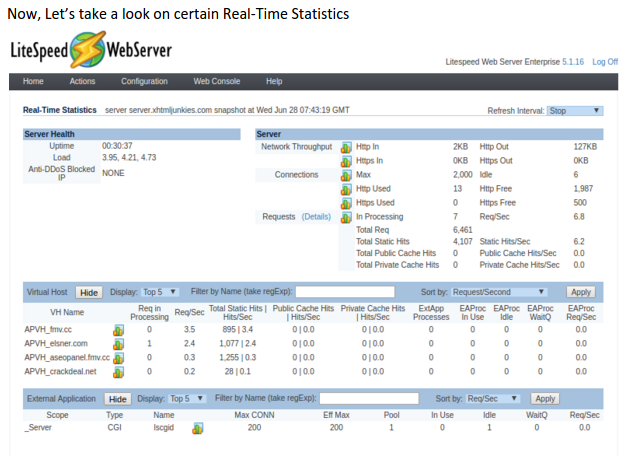 The link of Real-Time Statistics leads to a page of status report of a real-time server. It’s a suitable tool to monitor the system. The shown report is a snapshot of your server statistics. The refresh rate for this snapshot is controlled by the Refresh Interval drop-down list in the upper right-hand corner. The report holds the following sections:

Most of the rows feature a graph icon which mentions Real-Time Statistics. Clicking the icon will open a graph showing row’s statistics which are updating in real-time. In Server section which lies next to Requests, there is a link labeled (Details). This highlighted link will guide you to the Requests Snapshot, where you can find detailed information on which clients are making certain kinds of requests or which aspects of your site are bottlenecking. The fields highlighted with blue area allow you to filter the snapshot to isolate certain parts of your server or look for clients that are performing certain actions.

/tmp/lshttpd/.status and .rtreport* are the file on which the statistics are based on and it usually takes 10 seconds to update these files. Make sure “lsadm” user belongs to “lshttpd” folder group and .status and .rtreport file group so that it can read the reports to generate real-time stats in WebAdmin Console.

Configuration How-To
This segment elaborates assembling of LiteSpeed Web Server to achieve desired functionality, better performance, or security. LSWS environment is more capable than these databases. Our documentation defines all the information.

Moreover, LiteSpeed Cache, LiteMage Cache, PHP, and other external applications like Python, Ruby, etc are covered in their own sections of the website and are not included here.

Custom templates that are been prepared for popular web applications and plugins can be used to make LSWS virtual hosts. Every template use LiteSpeed native configurations. They are not required if you are moving an existing site with web applications from Apache.

LiteSpeed vs Apache vs Nginx, Who Does Magento Hosting Better?

Before last years, Magento conducted a conference, there we announced a guideline where we stated that LiteMage performed ~17-40x better than Turpentine + Varnish. This led to several people questioning the validity of our benchmark because LiteMage seemed too good to be true. A year later, we decided to revisit this benchmark with the latest version of each software to see where we stand.

In this benchmark, we compare Magento 1.9 running on LiteSpeed Web Server, Apache, and Nginx to find out which web server better meets the needs of the modern eCommerce environment.

We tested our 3 server setups both with and without a caching solution by running siege to simulate 50 simultaneous users accessing a Magento store. In an attempt to resemble a real-world production environment, we had each simulated user access 10 random catalogue pages from a list of 127 items. 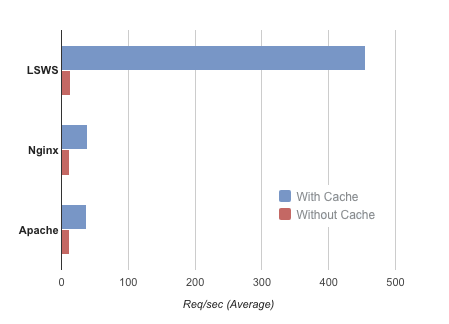 LiteSpeed and LiteMage have performed well together with a wide margin here, it’s important to note that regardless of which web server you choose, in this regard, caching makes a huge difference, in the worst case more than tripling a number of requests per second on average.

Once Again, in this calculation, LiteSpeed and LiteMage together take over the competition. In general, longest transaction time also improved for every server when using cache, but by a much slimmer margin. LiteSpeed Web Server cut nearly 90% of the time, its longest transaction took while using the cache at the same time other web servers tend to improve only by 10% using the polished cache. In a well-performing application, network bandwidth is not a limitation. These tests used a 10Gb switch and 10Gb cards on both the client and server machines. These results are based on software limitations.

This final measurement is yet another example of how caching puts your web server on an entirely different level. While LiteSpeed + LiteMage outperforms the competition yet again, the throughput for every server improved, in most cases by more than 5x, when using the cache.

We calculate your web server how fast it performs when serving random pages to 50 users at the same time. In this regard, LiteSpeed and LiteMage together are the clear standout among all included server setups. If you are running a Magento store, you have to run it with a caching solution, and there is no caching solution faster than LightMage cache!

Some of you might doubt our test results, particularly because you may get much better performance out of Varnish. The reason for this difference is probably simple. Perhaps during our testing, we used a different testing tool or testing methods and this change has had a huge impact on the results of our test.

Our advice is to NEVER use “Apache Bench” or “ab” for this type of testing. “siege” is capable of following cookies while “ab” cannot. Using commands like.

does not simulate traffic for 50 visitors with each visitor accessing 10 pages. It actually simulates “ONE visitor making 10 parallel connections and accessing the same page 500 times.” The result of this command may look stellar, but it in no way resembles a real world scenario and could not be more unrealistic.

We suggest sticking with “siege” unless you have access to more advanced testing tools such as “loadrunner”.

Even with “siege”, the number of pageviews for each visitor has a huge impact on the result. Here are the results of running the above tests with 100 page views per visitor. Varnish gets much better results in this round of testing, but you should consider the actual value of these results. In a real world situation, how many visitors will access 100 catalog pages in your store?

These results can be seen below. 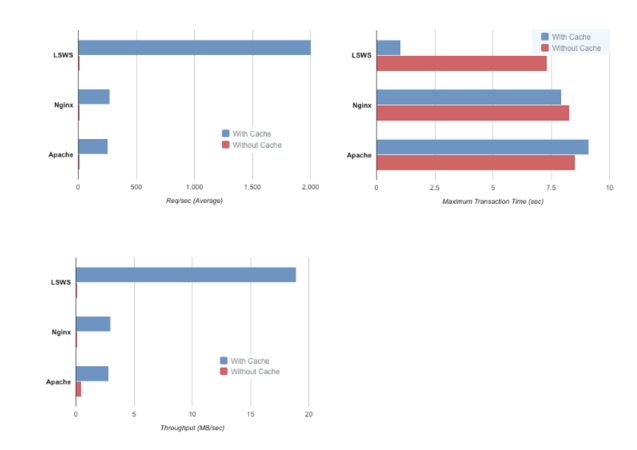 Real world result is not shown by the benchmarks as it’s the common complaint regarding benchmark. It is not meant to imitate the real world. Moreover, the difference should be highlighted between the web server speeds

Benchmark of Tristan’s (above and below) regarding LSWS and Apache are two different event that are happening at the same time. The difference are been shown with their capabilities. As the number of concurrent connection got increased (from 20 to 50), an explosion occurred in Apache’s RAM usage and server load. While, in LSWS, not a single change took place virtually. Now, here LiteSpeed rises in race with Apache. It cuts the load on high traffic servers as well as allow you to host more accounts without upgrading your server.

But, two different concurrency levels were examined on two different machine: 20 concurrent connections regarding small VPS and 50 concurrent connections of a dedicated server. The reason behind this process is to check the strength of both the server. When Tristan moved ahead with the test, the Apache server which was running on higher concurrency on the VPS was not able to handle the LiteSpeed Web Server, but on the other hand, everything was up to date. 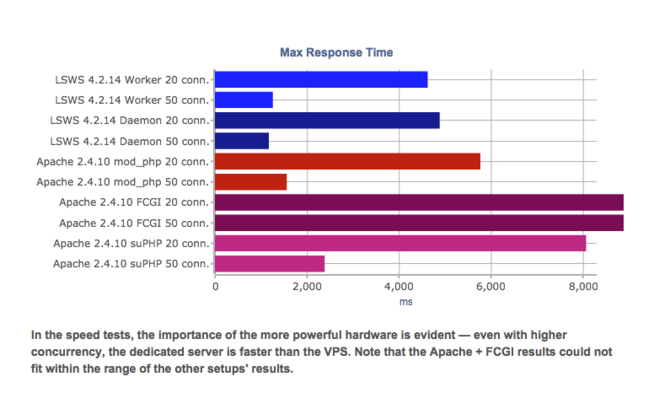 This difference of the speed benchmark in hardware doesn’t show us a good image of speed when concurrency was increased. Still, we see that LSWS is faster than Apache whether it’s Apache’s FCGI or suPHP setup. Real differences were seen in traffic spike and Apache was not able to handle the traffic.

What’s the difference between a domain name, website and web hosting?